Uncharted: Legacy of Thieves improves two of the series' best entries with significant, but unsurprising, results.

Naughty Dog is one of the most recognizable names on PlayStation hardware, and the roaring success of its Uncharted franchise across two generations of the console plays a large part in that legacy. It makes sense then that the studio's first full release for the PlayStation 5 celebrates that storied history, bringing two of the series' best entries to new hardware with a suite of improvements that make experiencing the treasure-hunting adventures a pleasure again. Although some of the underlying design choices are showing some age, the Legacy of Thieves Collection is the best way to play Uncharted 4: A Thief's End and Uncharted: Lost Legacy.

Across both games, the most significant changes are clear to see in the game's three modes of play. Fidelity mode targets a native 4K presentation, with the frame rate aiming for a locked 30fps(and sticking there for pretty much every scene). The new performance mode, which is likely the best way to play, reduces the resolution to 1440p but doubles the frame rate to 60fps, which it easily maintains for much more responsive gameplay. A third mode, Performance+, cuts the resolution even more, with a native 1080p presentation and a frame rate that aims for 120fps. You'll need a display that supports that in the first place, and even then, it's a tough concession to make visually for added fluidity that's not really required for the narrative-focused adventures that this collection contains.

What the additional horsepower of the PS5 offers, then, is choice, which wasn't present with the original releases on both the PS4 and PS4 Pro. Both Uncharted 4 and Lost Legacy have been playable on PS5 through backwards compatibility, but have been frustratingly locked to the same 30fps cap as the PS4 versions in both respective campaigns. The higher frame rates for both were reserved for their respective multiplayer modes, which aren't included in this Legacy of Thieves Collection anyway.

The improved performance dramatically enhances both games, especially when balancing resolution and overall frame rate. The Performance mode lets the distinctly detailed levels and picturesque backdrops maintain their eye-catching allure, while the moment-to-moment action feels better than ever with the higher frame rate. Uncharted's occasionally sluggish shooting feels snappy and responsive, and I found myself able to quickly clear enemy encounters with more confidence than I did playing the originals. How much this influences your decision for a replay is subjective, but it's a fantastic way to experience both games for the first time.

It's in replaying Uncharted 4 specifically where the game's slow but measured opening hours become a bit difficult to overlook, especially when the narrative surprises that they build toward are dulled for players who've seen them already. Admiring the game's ability to make use of improved hardware only goes so far when you're trundling atop the roofs as a young Nathan Drake or going through the motions of a prison escape that's meant to set up the core conflict of the sequel. It's a story that benefits so heavily from initial surprises that revisiting them doesn't offer the same impact, which you need to keep in mind when considering that this upgrade isn't free. This won't apply if you're coming to Uncharted 4 for the first time, and the time since its release hasn't made its subtle shift in overall tone and climatic finale to Drake's story any less impactful.

Unlike other publishers, Sony has committed to the increased $70 retail price of its PS5 games, and thus Legacy of Thieves requires either a full purchase or a $10 upgrade fee if you own either Uncharted 4 or Lost Legacy on PS4. It can be a frustrating fee to pay, especially when you consider that The Last of Us 2, Naughty Dog's latest game, received a free patch to unlock the game's frame rate on PS5 last year. Thankfully, you only need to own one to get access to the entire collection, which might come in handy if you jumped into the final chapter in Nathan Drake's story but missed out on the stellar side-story starring Chloe Fraser and Uncharted 4 antagonist, Nadine Ross. Given that numerous other games have seen similar upgrades without the same charge, you might find it difficult to be comfortable with the surcharge, but at the very least, you're getting both games with just a single purchase.

If you did miss out on Lost Legacy the first time or are returning to it again, it doesn't suffer nearly as much from age as Uncharted 4 does. Taking all the new additions from Uncharted 4 (the small, open hub areas and the inclusion of a grappling hook), Lost Legacy tightens up the pacing and reduces the overall length, both of which make its story punchier and its flow more exhilarating. It's still a sizable adventure, clocking in at around 10 hours, but the pace at which set-pieces arrive and resolve–never mind the much brisker opening–make it a more suitable way to experience these new technical enhancements if you are just looking for a sample as opposed to a time-consuming replay of Uncharted 4.

Outside of the additional visual flair, The Legacy of Thieves collection also adds support for both the PS5 DualSense and the console's 3D audio. The enhancements on the DualSense should be unsurprising, with the adaptive triggers offering some resistance for weapons and the controller's vibration adding a lot more granularity than the DualShock 4. While not novel anymore, the work Naughty Dog has done with these features still feels premium, with some of the best adaptive trigger tuning I've experienced yet on the console. The most impressive enhancement, however, is the one that 3D audio provides. There's just so much more you can pinpoint in Uncharted's levels with this setting on, down to the gentle ping that Drake's grappling hook makes against his belt when he's moving or climbing. It's, again, one of the best examples of this technology, making it stand out more than most titles that support it.

There's no question then that you are getting a vastly superior way to play both of the PlayStation 4's Uncharted entries, afforded by the more powerful hardware of the new generation of consoles. The upgrades are in line with what many other games from other publishers are putting out for free for players, but the upgrade structure here does allow you to grab both games for a small fee even if you only own one. That softens the blow somewhat, but it's a factor to consider if you've already experienced both games, with Uncharted 4 faring worse with its extremely slow opening when played through again. These are still both exceptional games, made better by more powerful hardware, making it an easy recommendation if you've missed them over the years.

View Comments (132)
Back To Top
8
Great
About GameSpot Reviews 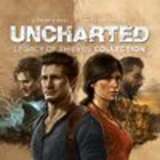 Alessandro played through most of Uncharted 4: A Thief's End for the third time and also completed Lost Legacy, while testing all three new visual modes that this collection offers. Standard performance was his preferred option, making combat and exploration deliciously fluid and responsive. Code was provided by the publisher.